The Roverchase Foundation
Be A Hero, Raise a Hero 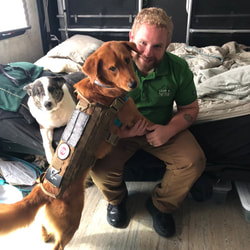 After ten years in the 160th Special Operations Aviation Regiment I requested to leave the regiment to take time to fix my mind, body, and family life. I was medically retired, four years later, from the Army for injuries received in combat. Prior to retiring I was placed in intensive inpatient care for Post Traumatic Stress (PTS). My wife had told me that I needed a service dog for PTS and my doctor agreed. I was not satisfied with some of the service dogs that I had seen through the VA. The quality of the service dogs were poor and the veterans were left on their own to figure out the problems they had with their minimally trained dogs.


I met Abigail Whitthauer and Roverchase at a convention. We talked to her briefly and started working the process for me to raise the money for a dog. Abigail taught my wife and me how to raise the money. We struggled through many different avenues to obtain the money for the dog. This is the best investment that I have made to date. We are so grateful that The Roverchase Foundation is now in place so that others are able to receive financial support through this organization.


Abigail’s determination made it possible for my service dog to literally save my life. My service dog has been my best friend for three years now. She is close to me when we go out in public, checks on me throughout the day, wakes me up from nightmares, interrupts flashbacks, helps me calm down when I am stressed or having a panic attack, reminds me to take medicine, and even reminds me to go to bed on my normal schedule.


Most veterans don’t have a support system, cannot raise money to save their own lives, and are stuck at the mercy of a mediocre service dog if they can even get one. Veterans without the proper help don’t live. I have many friends that have committed suicide because of PTS and many more acquaintances that I know of. Our war is over but the war is still alive in our minds.


After years of therapy, medication, my wife, and Lexi (my service dog from Roverchase) I rarely have nightmares, flashbacks, and no suicidal ideations or attempts. I can live a mostly normal life. I will never be normal, but that is to be expected. Roverchase tailored Lexi to be exactly what I needed. They spent months preparing my perfect prescription. Their tireless efforts have helped to reduce the 22 veterans a day that die because they can’t get the horror of combat out of their minds.


Roverchase saved my life. I hope one day the service dog recipients will be fully sponsored through The Roverchase Foundation. One person will struggle with scraping the money together for their dog, but group of individuals and corporations can change lives and have a positive impact on the lives of our nation’s Service Members.
​